By Kevin Campbell, US Head of Transplant

This year, Sanofi is honored to be a sponsor of the Transplant Life Foundation’s Transplant Games of America. The Games, held every two years, bring together members of the transplant community to raise awareness of the life-restoring importance of organ, cornea, bone marrow, and tissue donation – all while having fun. Ahead of the 2022 Games, we had the great fortune to connect with Aimee, a founding member of Sanofi’s Kidney Transplant Connector (KTC) program which offers free educational presentations to patients who may need a transplant, their caregivers, and those who are considering becoming a living donor from a group of experienced transplant recipients and donors. Aimee shared her personal experience with transplantation and described the ways the Games demonstrate how members of the transplant community, including herself, have powerful and inspiring contributions to make. 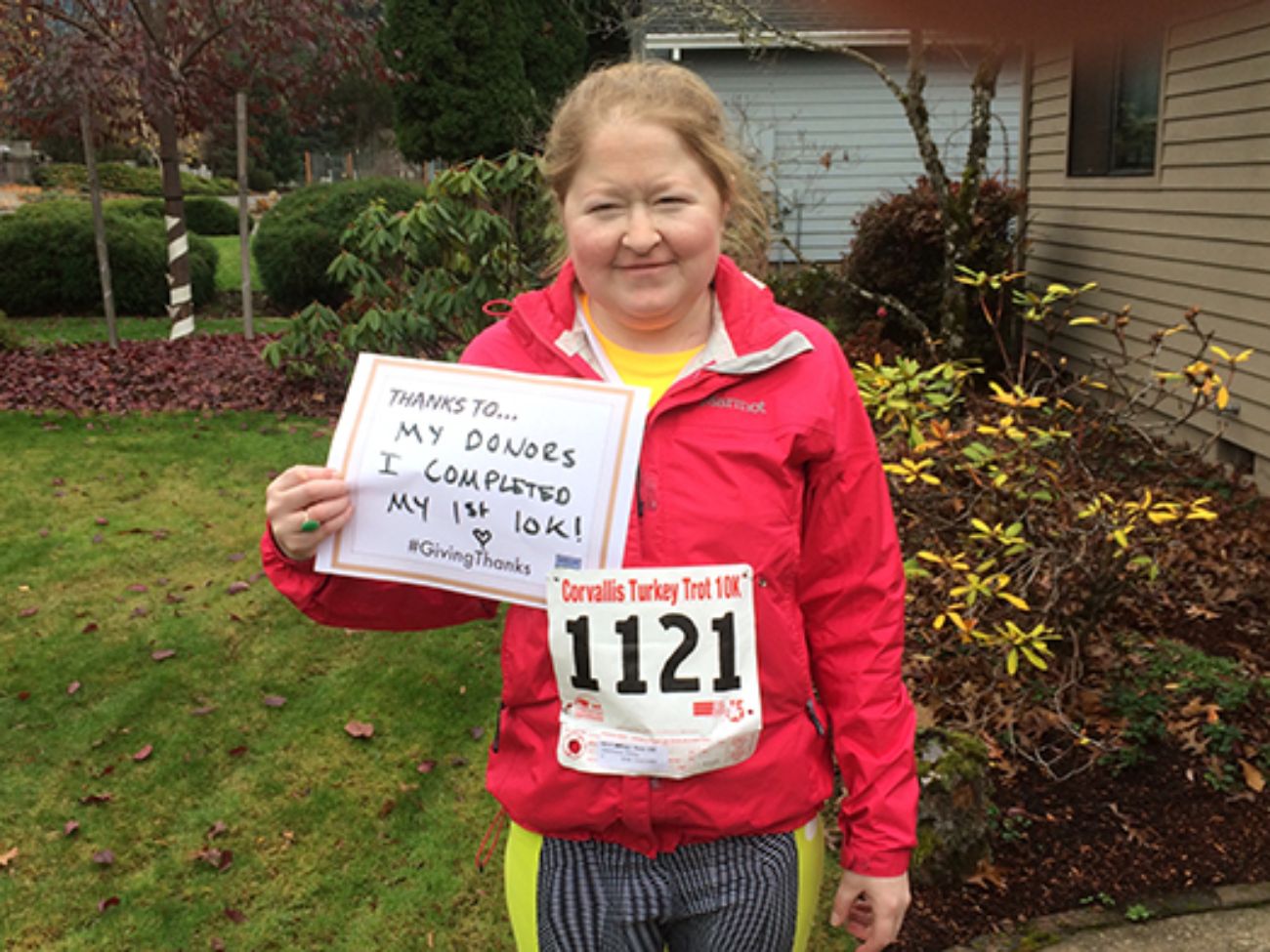 Aimee finishing her first 10K. At the 2022 Transplant Games of America, she will be a coach and compete in several events, including the 5K race.

Kevin Campbell: What is your personal connection to transplantation?

KC: Why did you get involved in the community and why do you advocate for transplantation?

A: It was during the process of preparing for and undergoing my second transplant that I felt there was a lack of education and resources provided to patients. I saw an opportunity to teach others how to advocate for themselves, because you're the one who knows you best. For me, it was about teaching people how to tell their stories and, in doing so, becoming their own best advocate.

KC: What inspired you to become part of the KTC program?

A: I think it's more important than ever that people have access to the information that is so critical regarding transplantation. I am very lucky to have access to all the information I need, but many people don't even know a resource like this exists. Programs like KTC provide an opportunity for people to better understand what they're going through and become advocates for themselves.

KC: What is particularly meaningful and important to you about the Games?

A: I think the Games are important because they focus on the things people with chronic diseases can do. It’s an opportunity for the transplant community to come together, to have a shared experience and show that we are as capable as anyone else. Very few communities have something like this, and I think it is a fun and special event.

KC: What inspired you to become a transplant athlete and what events are you competing in?

A: This will be my first time going to the Games and competing. My primary goal is to support the community and be more of a coach than an athlete – that being said, I still will be competing in several different events. I'm part of a team called the Transplant Trotters, and I will be participating in a 5K event and a softball throw.

KC: What do you think the Games help to accomplish for the transplant community?

A: Competing is the kind of thing that many members of the community don't necessarily consider doing because they’ve received a transplant; the Games give them an opportunity to do just that. And it's not just transplant recipients. It's living donors. It's donor families. It's the families that support these individuals. Right now, with the state of the world, I think we're all looking for something fun to do. And when you come together as community, you can interact with people who have that shared experience, connect on a deeper level, and have fun in a meaningful way while doing so.