Without Hesitation: Joel Navigates the Long Road of aTTP

Joel made his living driving a semi-truck cross country. He loved the scenic beauty and the feel of 18 wheels of rubber as he travelled across the United States. Unfortunately, after four life-threatening medical emergencies while he was on the road, Joel knew his career as a truck driver had to come to an end.

In 2010, Joel had stopped in Little Rock, Arkansas to get his truck repaired on his way to deliver cargo in Chicago. After spending the night in a local motel, he noticed purplish-colored spots on his face, back and side that looked like a bruise. Joel was concerned that he had picked up a strange bug at the hotel, but quickly wrote it off so he could complete the 650 miles he had left to Chicago. He made the delivery feeling completely exhausted and with a migraine, not the splitting-headache type, but the kind where he could see auras and lights in his peripheral field of vision. 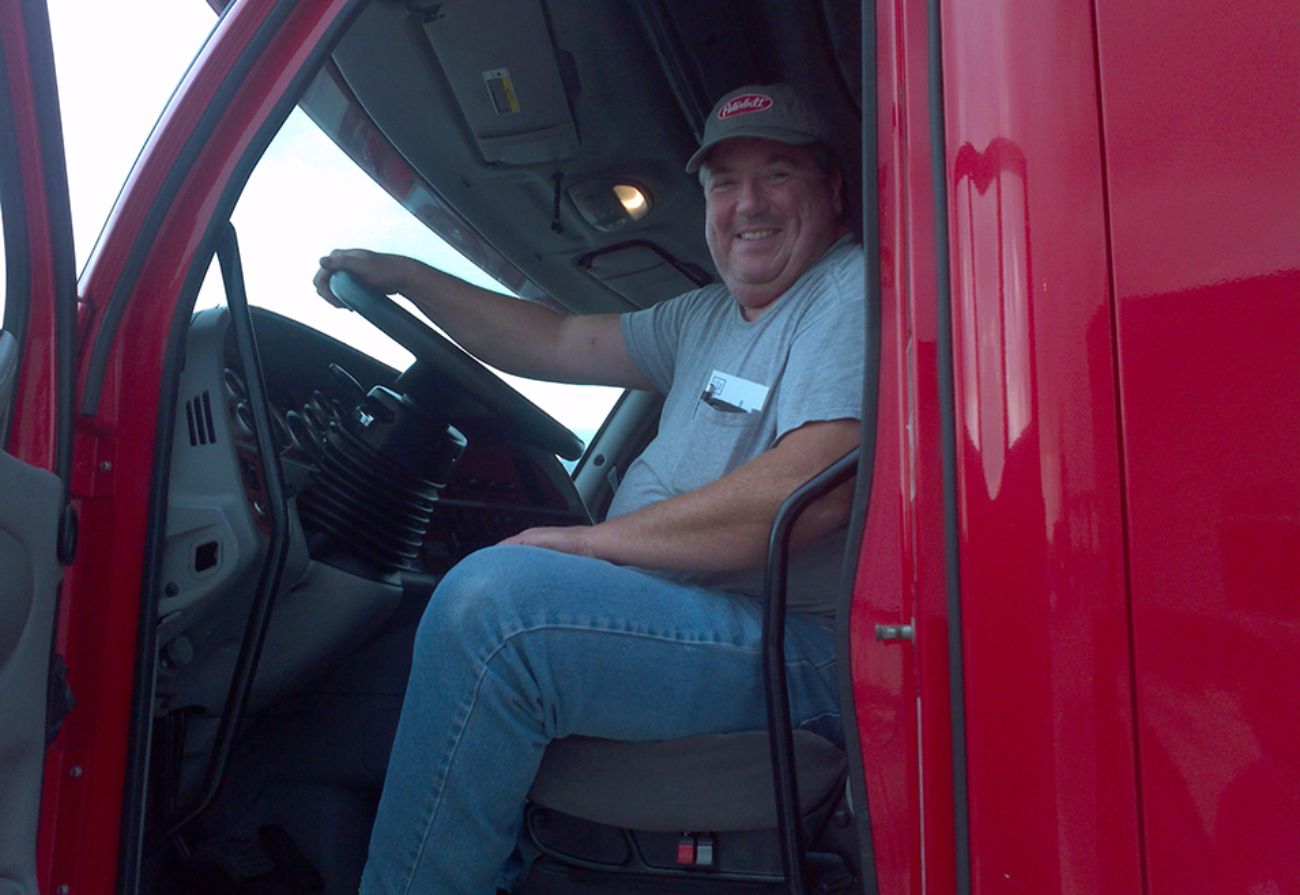 Joel sitting in the cab of his truck.

“I told myself, I need one good night of sleep and I would feel better the next morning. I went to bed early but kept having the urge to go to the bathroom. I couldn’t go. I knew based on a previous job working in a dialysis clinic, that it wasn’t normal and thought I might have a urinary tract infection,” Joel explained. “I walked to the front desk and asked for the best hospital in town. I left my truck and took a taxi to the emergency room.”

After Joel was admitted, his team of healthcare providers quickly confirmed Joel did not have a urinary tract infection, but didn’t have an alternate diagnosis for what was causing the migraine, bruising of his skin and his inability to urinate.

“They called a hematologist. He ordered a blood sample and asked me about my symptoms. He recognized the symptoms as acquired thrombotic thrombocytopenic purpura. I spent 15 days in the hospital, 1,000 miles from home with a condition I knew nothing about,” Joel recalled. “After the diagnosis, I held my head in my hands and sobbed my eyes out.”

Acquired Thrombotic thrombocytopenic purpura (aTTP) is rare blood disorder that is a medical emergency and can be life-threatening. It occurs when there is a deficiency of an enzyme in the immune system (ADAMTS13) that causes blood clots to form in the small blood vessels, low platelet counts and destruction of red blood cells. For the estimated 2,000 people living with aTTP in the U.S., many experience a wide variety of symptoms, including fever, fatigue, headache, confusion and bruises or dots on the skin. aTTP is diagnosed at all ages, but typically continues to impact people over the course of their life with recurrences.

Two years and eight months after his diagnosis—on Fourth of July weekend—Joel had his first aTTP reoccurrence. Driving from Detroit, he knew he wasn’t feeling right. He made it to his destination in Portland before calling 911. Joel spent nearly two weeks in the hospital before being transferred to Houston to be closer to his family where he spent an additional two months in the hospital. It took nearly nine months for Joel to feel fully recovered.

About two and a half years later, Joel experienced his third recurrence in Central California. Then his fourth recurrence happened a year and a half later in Joplin, Missouri. This time, Joel nearly died.

“I was restless and I couldn’t get comfortable to sleep. I kept telling myself, I can just sleep this off and go right home to check myself into a hospital closer to home. But in the middle of the night, I still couldn’t sleep and walked down to the diner to order some breakfast. I opened my mouth, but nothing I was saying made sense,” Joel recollects. “The waitress gave me paper and a pen – I immediately wrote ‘911.’ I walked myself out to the ambulance, but once inside, they gave me something to knock me out completely.”

Joel doesn’t remember arriving at the hospital. Two days later, his family arrived from Texas to tell him he was in the intensive care unit on life support and had been transferred to a hospital in Kansas City.

“They had given me platelets at the first hospital, which fueled the fire. And I was unconscious, so I couldn’t tell them ‘I have aTTP.’ It was two days later and they still hadn’t diagnosed me until my blood tests came back. I almost died,” states Joel.

After spending 35 days in the hospital after his fourth recurrence, Joel decided he couldn’t keep driving across the country, and risk being so far from home if another occurrence were to happen. Since making the decision to walk away from the career he loved, Joel has had two more episodes with each precipitated by symptoms of extreme fatigue, but feels confident in his expert care team close to home – they’re familiar with his history. He also has learned to no longer hesitate and to acknowledge the signs of aTTP early.

“Before each episode, I go through denial. I think there’s someone else that needs that hospital bed worse than me. I try to brush off the signs, but it’s so important to seek medical attention immediately. Don’t wait,” Joel notes. “aTTP is extremely rare, so the more you know about it, the better you can deal with it. aTTP is life-changing and you can’t ever fully recover or forget something like this, but a positive attitude and having a good sense of humor has been very helpful.”